We focus on training our judoka to be agile and use their mobility to change the body's position efficiently. This helps their balance, speed, strength and coordination.

Cluarankwai are famous for our approach to coaching the proper technique of each throw. Our judokas train hard on their technical ability and try to master each individual throw.

Respect is a huge part of a judoka's training, you must learn to respect the sport as a whole including your opponent and their ability, the referees and their decisions.

Being able to use your strength and power whilst maintaining control is important, but we also train our judoka to use their opponents own strength against them.

Cluarankwai Judo Club (Kilmarnock) is one of the oldest clubs in Scotland having formed in 1949. We are not-for-profit organisation, any funding we get goes back into improving the club for members.

We have the highest number of qualified BJA Senior Club Coaches in Scotland at UKCC Level 1 and 2. Our classes run 3 nights a week for both adults and children, and we currently have over one hundred active Junior & Senior members.

The club has had many special guests & visitors over the years who come from all over the world. This has included World Champions, Olympic Medalists, and some of the best coaches that the world has to offer.

The Club moved to a new Dojo facility in 2007 which was re-opened by Kisaburo Watanabe 8th Dan.

The Club has the largest purpose built Dojo in Scotland and some of the best facilities in the UK. The dojo is used for national and local events throughout the year and its facilities are used by other sports for training and seminars.

There is a double mat area with seating, two large changing areas for women and men, and a gymnasium for cardio and strength training.

We welcome everyone to visit and train at our club, one of the best and safest Judo training facilities in the world.

Although we are primarily a judo club, our facilities allow us to provide the ideal training conditions for other sports.

We currently have several other martial arts including Aikido, Jiu Jitsu, and Self Defence lessons.

We have also had Alexander Retuinskih, the judo/SAMBO instructor take classes on his Russian Martial Art R.O.S.S with people from the ScotROSS group attending.

We also have Gymnastic & Yoga classes run by an independent club who make great use of the mats, sprung floor and padded walls. 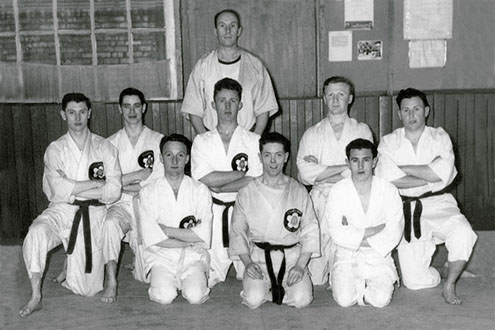 The club was started in Kilmarnock by members of the Massey Harris Tractor Plant Workers Association Club in a room in the big house at Annanhill in 1949.

Ted Routley, who had come up to Scotland from England to work at the plant, was a brown belt at the time but was graded in Edinburgh by Gunji Koisumi, the founder of British Judo, to black belt and was the founder of the club.

He had been a Commando in the Second World War and trained at the Budokwai in London. Some founder members of the club, Alex MacKintosh, who was trying to Judo by following instructions in a book  and George Gilmour (senior) who visited the Budokwai in the 1946 being two who had an interest in Judo before the club started.

The name of the club comes from the Galic for Thistle - Cluaran and Kwai the Japanese for the way. The thistle was to represent all round defence but also it’s seeds would scatter for new clubs to grow. Our club motto is Defence not Defiance.

The club has had many venues, in the 1960’s it was in the old Scout Hut in the Ossington Gardens not far from the current club. In the late 60’s the members raised funds and with a grant from the Scottish Sports Council and built a purpose built training hall, which had one full mat area. This was the only one in Scotland and was complete in 1972.

The old club in Ossington Gardens was very Spartan but produced many Scottish champions, A British and European individual medallist in John L Young and Edward J Cassidy who was British champion 4 times and a European team medallist as well as training in Japan for 3 years. The club also won the Scottish team championship twice in the 1960’s

The new club continued to produce many Scottish and British medallists and is still the only purpose built Dojo in Scotland. The committee in the early 1990’s were advised by Colin McIver that there was a possibility of obtaining a grant to extend the club from the Foundation for Sports and Arts based in Liverpool which was funded from the Football Pools. Plans were drawn up but due to planning issues an application was not made until 1999 but by this time it was the Lottery Fund who had the resources.

After a long drawn out process and fund raising the new Dojo was built in 2005 and fitted out for its official opening in 2006 by Kisaburu Watanabe 8th Dan. Jim Longmuir was the project manager, and could write a book on all the twists and turns and the amount of time spent pulling the finance and other elements together. As well as Jim the main influential coaches and administrators during the period 1975-2019 were John S Young, George Gilmour (J), Robert Longmuir, Paul Cassidy, Morgan Laurie and Willie Gilroy.

The club also hosted the Ghana team training sessions during the Commonweath Games in Glasgow in 2014 and the Coach Sam Querco still keeps in touch.

Three years ago the Cluarankwai were the first Judo club to be awarded a direct club investment grant to employ a part-time coach. Louise Renicks one of Scotland's Gold medallists from the Glasgow Commonwealth Games was awarded the post and worked in the schools and the club for two years, doubling the junior membership.

Also parents who have made a significant contribution are: Ian Paton, Jean Jamieson, Alistair Welsh, Pamela Kilpatrick and many more.